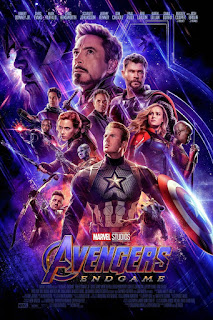 Directed by Anthony and Joe Russo

Based on the Marvel Comics by Stan Lee and Jack Kirby

Caution for potential spoilers ahead!

11 years ago, Marvel released the first Iron Man movie, and nothing has been the same since. Every year since then, Marvel has released movie after movie introducing us to more and more amazing superheroes to fall in love with, and more villains to root against. Every year I kept thinking how could they top themselves, then they released last years Avengers: Infinity War which merged many Marvel superheroes including The Avengers, Black Panther, Doctor Strange and more. After that movie ended with such a cliffhanger, myself and every other Marvel fan have been eagerly awaiting Endgame-- dare I say, the glorious, bittersweet end to the past 11 years.

The movie begins just a short amount of time after the tragic events at the end of Infinity War. The remaining Avengers; Steve Rogers (Chris Evans), Natasha Romanoff (Scarlett Johansson), Thor (Chris Hemsworth), Bruce Banner (Mark Ruffalo), James Rhodes (Don Cheadle) and Rocket (voiced by Bradley Cooper) are joined by Tony Stark (Robert Downey Jr.), Nebula (Karen Gillan) and Captain Marvel (Brie Larson) and together they plan to track down Thanos (Josh Brolin) and steal the infinity stones to reverse the actions they caused. After Thanos reveals that he already destroyed the stones, Thor kills him. The movie then picks up 5 years later, with Scott Lang aka Ant-Man (Paul Rudd), returning from the Quantum Realm and proposing that they travel back in time through the Quantum Realm to stop Thanos from ever getting the 6 infinity stones.

This movie is an amazing way to reward all the loyal Marvel fans who have been following these heroes for more than a decade on screen. Everything that happens in this movie is so incredibly satisfying for someone who has seen all the movies. The time traveling aspect may seem a little corny at first, but it is actually the perfect way to bring in some characters from all the other movies one last time, and to give some characters the happy ending they deserve. The merging between the different movies in Endgame is even better than in Infinity War-- as this time we get to see some characters from Thor, Doctor Strange, Captain America and even the latest lady hero, Captain Marvel.
For those who maybe haven't seen every Marvel movie from the past 11 years, you will still thoroughly enjoy this movie you may just miss some references, or you may not cry so hard with nostalgia like the rest of us!

The Marvel movies have always had a lot of comic relief thrown in with the action, but this one seemed to hit harder with the comedy. It seemed to hit harder with all the emotions actually. Thor brings a lot of comedy, since he is now an alcoholic with a beer gut and no more chizzled abs. His character has gone through tremendous loss and is experiencing a lot of guilt from not killing Thanos, so he is in rough shape in the beginning of the movie. But, his condition does give for some big laughs. Even though this film has less of the characters we know and love, it adds a few of the older ones we didn't get to see in Infinity War like Hawkeye (Jeremy Renner) and Ant-Man.

As fas as acting performances go, Chris Hemsworth wins the gold with his new version of chubby and sad Thor. Robert Downey Jr. brings some real change to Tony this time around, while he's no longer the arrogant and selfish man he has been in the past. Paul Rudd is fantastically hilarious again as Ant-Man, Mark Ruffalo brings a new level of acceptance for being The Hulk, Scarlett Johansson brings a lot of emotion this time around to Black Widow, Brie Larson is a bad-ass as Carol Danvers, saving the day more than once.  The whole cast does an amazing job. I was so happy with the smaller cameos from people like; Tessa Thompson (Valkyrie), Rene Russo (Frigga), Evangeline Lilly (The Wasp), Hayley Atwell (Peggy Carter), John Slattery (Howard Stark) and Tilda Swinton (The Ancient One).

The 3 hour run time may seem a little daunting at first, but it flies by with all the non-stop excitement. It pays homage to not only the Avengers but the Marvel Cinematic Universe, so brilliantly it will give you goosebumps, make you laugh and undoubtedly cry. There is a scene of the Marvel women all together that did all three for me actually, I thought I would combust.

Titles of and images of movies are owned and copyrighted by their respective owners.